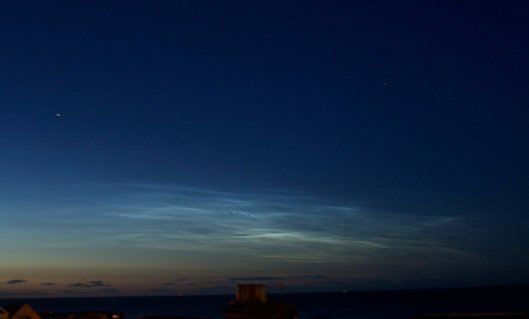 I spotted this nice display of noctilucent clouds last night. I have blogged about these clouds before; as I noted then I don’t observe them seriously, but I do keep an eye out for them. This year it has taken me until nearly the end of the season to see any. People sometimes give the peak season as running from two weeks before the solstice until four weeks afterwards. We are now already more than four weeks after the solstice,  so I feel myself somewhat lucky to have caught this display.  But, as the archives at NLCnet show, the clouds are sometimes seen as early as the end of May and as late as the beginning of August.