I have just got back from a week’s holiday in Crete. I spent most of this studiously avoiding thinking about work. But on such a rocky island it is hard to avoid noticing the rocks. Annoyingly, I could not find an geological guide of any sort to the island, so I had to just look at the rocks and make my own guesses. The interior of the island is mostly made of a hard, grey limestone. (It really is grey inside; that orange stuff is just surface staining.) In places, the island’s famous gorges cut through it, exposing the bedding planes. 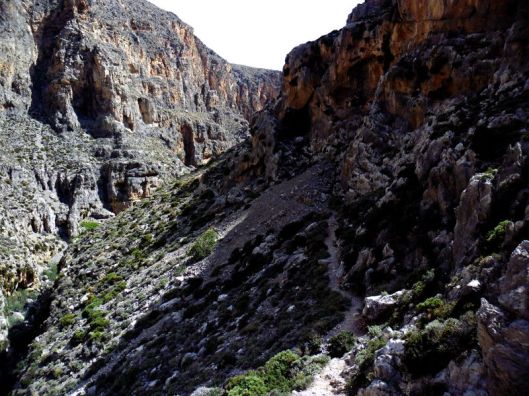 If you are lucky you can see how strongly folded the limestone is. (This picture is actually from last year’s holiday, and is at the bottom of the famous Samaria gorge at the west end of the island.) 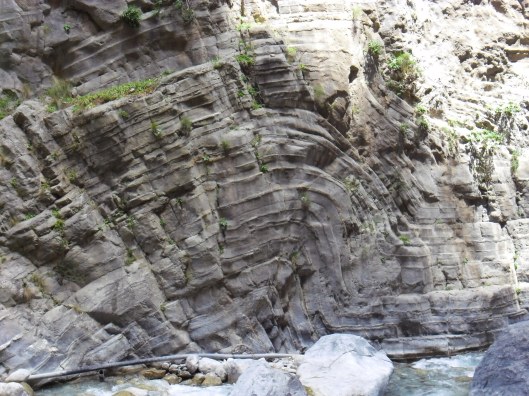 In the area round our hotel (the very splendid Eden Rock in Agia Fotia) the rocks were conglomerate, many tens of metres thick. A good place to see them is the gorge at Koutsouras (about 6km east of the hotel) sometimes known as the “butterfly gorge”. 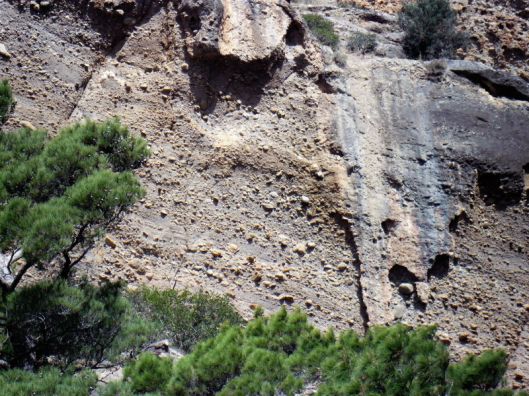 Even an amateur like me is going to look at this lot and guess that some serious mountain-building had been going on not very far away.

The clasts in the conglomerate are quite varied … 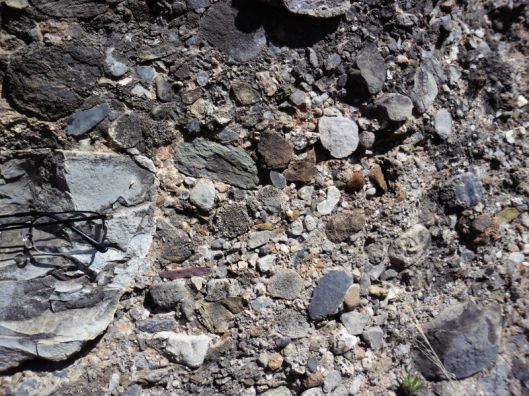 … there is a lot of the limestone, but also sandstone, vein quartz and some red and green bits that I suspect might be metamorphic rocks that come from below the limestone in the core of the island.

We had a rather direct reminder of how tectonically active the region is; we were woken up in the middle of the night by an earthquake. I don’t think I have felt an earthquake before, despite previous trips to Crete and California, so I was quite interested by it. Fortunately, at a strength of M5.0, it was not a big enough quake to do any damage, even though the epicentre was only a few kilometres away. I found out the details of the quake by using the website of the USGS Earthquake hazards programme and have just entertained myself by using the web site’s “did you feel it” feature to report that yes, I did.