Last night and this morning brought not one but three things that I have not seen for a while. One was a sunrise at the time that my alarm clock goes off: it is nice to feel that the winter is coming to an end. The second was a frost: this winter seems to have had a lot of wind and rain and little in the way of proper cold days. I dread to think how many garden pests will have survived the winter as a result and are lurking in wait, ready to chow down on my plants as soon as they start growing.

The third thing was the Aurora Borealis, which failed to make an appearance for the BBC’s stargazing live. But last night it popped up with little warning. A group of us left the pub and wandered down to the harbour to stare at it. It was clearly visible and had a certain amount of structure to it. Most of it looked green, but there was also a red bit. Infuriatingly, I didn’t have a camera on me, so I didn’t get to attempt a photo until I got home, by which time the display had faded considerably.

You can certainly make out that the sky behind the chimney is glowing green. I’m not sure whether you can see a red glow above it; this camera has a tendency to show a slight red background when pointed at a dark sky. It’s a pretty feeble effort compared to some of the pictures circulating on the local facebook pages and on this blog post by Kit Carruthers. (I have added my photo to this post as an update: I initially didn’t think I had recorded any aurora at all.)

I got a rather belated warning email from the aurorawatch web site. Aurorawatch send these emails out to subscribers whenever the geomagnetic activity hits a certain level (coloured amber on their plots). The plot for last night looked like this 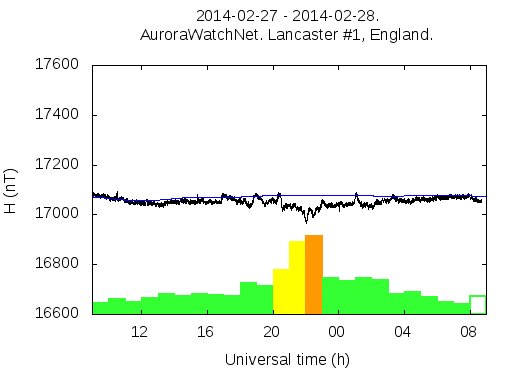 The time goes from before lunch on Thursday 27 February through to breakfast-time on Friday 28 February. The orange bit is 10pm-11pm.  I observed the aurora sometime between 9pm and 11pm (annoyingly, I had no watch as well as no camera, but it must have been close to 10pm). Reports suggest that the aurora was brighter between 8pm and 9pm. The BGS have a variety of information for aurora and geomagnetism watchers. These also show a fair amount of activity last night.

We need to enjoy the aurora every time we get the chance. Aurora are related to sunspots and the current sunspot cycle is pretty feeble compared to the previous one.

This plot of the measured (wiggly) and predicted (smooth) sunspot number comes from the solar physics branch at NASA’s Marshall Space Flight Center. They have  a lot of other interesting information on what the Sun is up to. It looks as if it will be a long time before the chances of seeing aurora are as good as they were in the early Noughties. There should still be more aurora this year than there were in January 2005, which was the last time (and only previous) time that I saw them, and was when I took this picture. 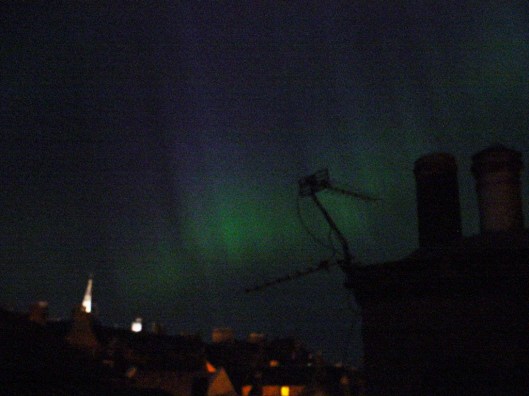